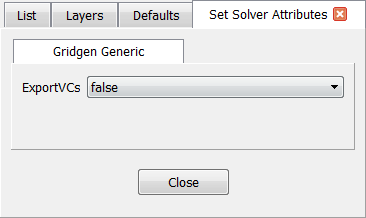 The export has now been fixed so that the appropriate information is written out. SPR Gridgen Version SPR Resolved a bug which caused Gridgen to exit when importing a database composite.

While in the new menu, all connectors are color coded in the Display window based on the number of times they are used within the grid. SPR A bug which caused the tetrahedral block to be deleted during prism extraction for an anisotropic tetrahedral block has been resolved.

SPR Resolved a bug in which the connector information was not displayed in the Redimension Grids Blackboard when a connector was highlighted. July SPR A bug was resolved which caused Gridgen to crash when deleting a control point that coincided with the end of a connector.

The Join command for database curves now detects whether the joined curve is slope continuous and if it is not you are given the option to smooth the curve to a tolerance that you specify.

This problem has been fixed.

SPR Fixed a problem in which Pick: The database Intersect command has been enhanced gridgem the addition of Closest Approach intersections for curves. SPR When using the Pick: SPR Resolved a bug that was causing periodic domains to become corrupted after connector redimensioning. SPR When scripting then copying of a connector and a subsequent redimensioning, neither the Glyph dimensioning nor redimensioning commands were journaled.

Logic has been added to resolve this issue. In Box tool for database entity selection, Gridgen was selecting more entities than those included in the box. SPR When imported from an IGES file, some database planes and surfaces were translated and caused problems during connector creation.

SPR Fixed an issue which caused Gridgen to exit with a memory error when repeatedly entering the structured solver with a subgrid, then aborting. Logic has been added to correct this problem. SPR Glyph scripts that contained the iterations flag for the unstructured block solver were not actually changing the block solvers number iterations.

Logic has been added to disable the Project button if no suitable surface entities are available.

SPR A graphics issue was causing Gridgen to crash whenever the object in the display was rotated. Pointwise CAE export can now create prisms by recombination for anisotropic tetrahedral meshes generated in Gridgen that contain pyramids. If the trimmed surface were modified so that the hole bounding curves were excluded, the new trimmed surface could not be saved. Further checking Gridgen performed on the domain caused it to be emptied. VCs are similar to material IDs in the structural mechanics field.

If other dimensions are desired, they must be specified within the script interface. Gridgen now features updated license management software. SPR Release Notes – Version 15 After placing a domain in a domain group, then splitting the block that domain belonged to and splitting the domain as a result, the group identity of the resulting domain halves were improperly set.

SPR A problem was resolved in which composite database and grid files exported in V SPR Corrected a problem with the Glyph command gg:: The number of custom boundary conditions BCs and volume conditions VCs that can be created in Gridgen has been increased to Overset assembly data can be imported into Gridgen where orphan and fringe points can be visualized.

Gridgen bit for Linux manhal is now available. SPR Setting the ConSplit angle to 45 degrees for shell entities was causing empty domains to be created. Logic has been added to correct this issue. March The following is a list of new features included in V If the database has unsaved changes, you are notified and given the opportunity to export a database file.

The Unigraphics native file reader is an optional product. SPR Resolved a bug that was causing unnaturally high concentrations of tetrahedral cells in the interior ggridgen unstructured block volumes.